“As engineers, we tend to think if we build it, they will come,” says Jason Dettbarn, founder and CEO of Addigy. “But the business world doesn’t work like that. We needed help and that’s what took us to StartUP FIU (Florida International University).”

Dettbarn had been having mild success with Addigy, a company he founded in 2014, offering cloud-based IT management platform specifically for managing apple Mac Computers. While more than 80 vendors provide this service for PCs, few companies offer the service on the Mac side, a segment of the marketplace that Dettbarn predicts will grow tremendously as more Mac-devoted millennials enter the workforce.

“We need investors to help take Addigy to the next step,” Dettbarn said. “Capital won’t be used for investigating the market or testing a product. We’re already up and selling. We need capital for marketing and advertising to really get the word out about what Addigy offers Mac users.”

Like many inventors, Dettbarn had limited knowledge about how to approach and obtain investors. “My customers are technical people and I can talk to them all day,” he says with a chuckle. “But investors are an entirely different group.”

He became a member of Cohort 1 of The Empower Accelerator program, StartUP FIU’s comprehensive, 14-week program to develop scalable traditional and social entrepreneurship ventures. Under the direction of Director Kate Sackman, the program provides coaches, skills training, advisors, access to speakers, and cutting-edge work space. Cohort 1 concluded in December 2016, and a second cohort began their session in February of this year.

“We’re here for the South Florida community, including students and faculty at FIU,” says Emily Gresham, co-founder of StartUP FIU. “Companies or individuals selected for each cohort bear no costs for our services, including The Empower Accelerator program. Entrepreneurs retain 100 percent of the equity in their venture.”

Dettbarn likes the passion and excitement he felt as a member of the first cohort at StartUP FIU. “Just like entrepreneurs themselves, StartUP FIU is new and out to prove themselves,” he points out. “The people at StartUP FIU are more motivated than other incubator programs.”

END_OF_DOCUMENT_TOKEN_TO_BE_REPLACED

Originally posted on The Miami Herald

Addigy, a local Miami software company that helps corporations manage their Apple Mac fleet, is preparing to expand its global reach with the help of Florida International University’s StartUP FIU. Addigy is a quintessential Miami startup with deep roots within FIU. As founder and CEO, I hold a Masters in Computer Science from Florida International University and cut my teeth in the industry managing worldwide sales operations at Kaseya, a major Miami tech company. Three years ago, I left Kaseya in order to devote my full energy on creating and building the first full-stack IT management platform for managing Apple Mac computers.

Addigy is a self-funded company based on the sweat labor of extremely talented local Miami talent. The engineering team consists fully of FIU computer science graduates who have immigrated from Cuba over the past 10 years. Addigy was recently honored as one of the Top Ten late-stage Miami startups selected for eMerge Americas two years running and is one of the fastest growing companies in StartUP FIU’s program. Building upon Addigy’s 100-plus customers globally that use Addigy to manage their company’s world-wide Mac networks, the company’s growth is expected to increase significantly in 2017. Addigy continues to expand at a record pace helping customers not only secure and manage the ever vulnerable Macs in their enterprise, but also helping them attract the top millennial talent, some of whom have never used a PC.

StartUP FIU is an intensive 14-week accelerator program that rapidly guides entrepreneurs through the paces needed to develop their new business ideas into successful growth companies. The accelerator program is open to FIU students, faculty and early-stage startup entrepreneurs in South Florida. All types of companies are welcome including traditional companies, high-tech ventures and social enterprises.

StartUP FIU has been integral to helping Addigy prepare for the next stage in funding and scaling our growth. StartUP FIU has provided us with an abundance of resources at FIU and very deep networks of talent throughout Miami. Our mentor Mario Cruz (director of Watsco Ventures), for example, has been integral in guiding us through critical areas of the Addigy business. There is nothing else like StartUP FIU in South Florida, period.

Keep an eye on Addigy as it breaks new ground in Miami and globally in the coming years, as well as the many other great companies being groomed for success in the StartUP FIU Accelerator program in Miami.

Jason Dettbarn is founder and CEO of Addigy, a Miami-based tech startup.

Pitch Day is an important milestone for the inaugural Empower Accelerator Program cohort. By this day, StartUP FIU teams will have successfully completed the 14-week Empower Accelerator program. They would have participated in nearly 30 presentations and workshops, taken part in critical mentoring and business advice, and presented their required weekly deliverables in preparation for this one day. It will be 8:30 a.m. to 12:30 p.m. on Dec. 6 at the Graham Center Ballrooms on the Modesto Maidique campus. 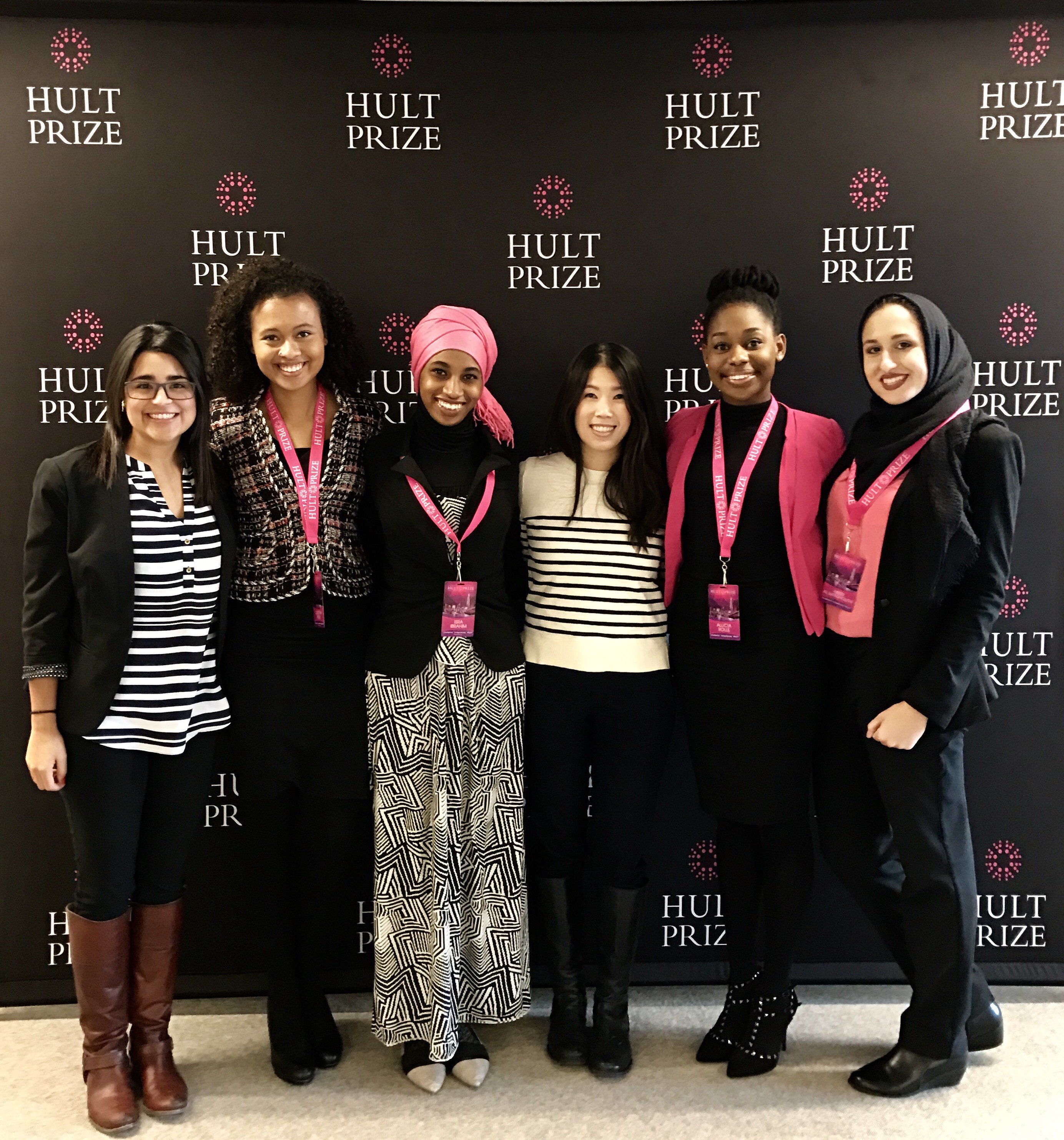 The 7th Annual Hult Prize, the world’s largest student competition whose winner receives a cash prize of $1,000,000 to launch their social venture, this year challenged participants to build a sustainable, scalable start-up enterprise. The emphasis in the 2017 competition is to develop a product or service that will restore the rights and dignity of 10 million displaced migrants, including refugees, by 2022.

An all-female team of four undergraduate students from Florida International University (FIU) formed the social venture called WeWomen and emerged as the winners of the Hult@FIU competition on December 9, 2016. The win secured them a spot in the Hult Prize’s Boston Global Regional Finals and Cohort 2 of StartUP FIU’s Empower Accelerator Program.

“We’re thrilled to be competing in Boston and are grateful for all the support from the StartUP FIU team as well as our mentors, advisors, and professors,” says team member Dorothy Peck. StartUP FIU, which is sponsoring the WeWomen team in Boston, is an initiative to develop and foster innovation and entrepreneurship. Cohort 2 of its Empower Accelerator Program is designed to help FIU students, faculty or staff and early-stage startup entrepreneurs create and grow their traditional or social businesses.

“Being part of The Empower Accelerator has been awesome,” said Peck, speaking of the program which started late January with 20 teams in its second cohort. “None of us on the team are business majors, so the super intense learning has been extremely valuable.”

“It’s exciting to see women from different countries and different majors coming together to develop a sustainable business to provide real help for refugees and other displaced migrant women,” says Daniela Cadena, who oversees social entrepreneurship for StartUP FIU and has been the team’s advisor since October 2016.

WeWomen is dedicated to solving a real problem for millions of displaced migrants: the lack of feminine hygiene products in refugee camps. Their solution is using leaves from banana trees to produce environmentally friendly menstrual pads.

“Menstruation is stigmatized in many cultures,” said Peck. “The pads are also expensive and not seen as a necessity in households where men make all financial decisions.” Women and girls can often miss 50 days from work and school every year, a burden inconceivable to these students who grew up in the United States and the Bahamas. The issue is particularly acute in refugee camps where women have resorted to using soiled rags or garbage that can sometimes lead to toxic infections.

The team’s business plan involves buying machines invented by an engineer in India to make the pads and obtaining banana leaves from Northern Colombia, another region with displaced migrant women, and employing them to prepare the leaves for export. WeWomen would sell its product in the U.S. market using proceeds from the sale to heavily subsidize the product in refugee camps in Africa and the Middle East.

Entrepreneurs don’t give up

Out of 50,000 applications and 65 Boston Global Regional teams, WeWomen narrowly lost its bid to be named one of the six finalists to Arizona State University’s team. “It doesn’t end here. It’s not a linear path, but entrepreneurs never stop,” said Cadena, who traveled with the team.

Ultimately the Rutgers University team won the Boston Regional Hult Prize competition earning them a spot to pitch for the top cash prize in September.

“I am extremely proud of WeWomen for taking FIU further than ever before at Hult Prize,” said President Mark B. Rosenberg, who followed the competition from Miami. “They are paving the way for students to create companies to help change the world!”

The team has already regrouped since Saturday. “We will be applying for the online wildcard spot at Hult and will continue in the Accelerator until Pitch Day,” said Peck. StartUP FIU co-founder and director Bob Hacker brought the Hult Prize to FIU as a way for students to engage in social entrepreneurship. “It’s exciting to see the evolution of our students from year to year,” says Hacker, who has been teaching Social Entrepreneurship for over ten years. “This generation will change the world.”