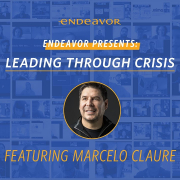 In June, I had the opportunity to attend a live webinar interview with Marcelo Claure as part of the series Endeavor Presents: Leading Through Crisis. For me, listening to such a distinguished entrepreneur was rare, valuable, and full of insights.  The following list consists of some of the points that resonated with me the most.  It was especially interesting to hear Claure’s take on managing through a crisis, the future of work, the value of respect, and the importance of entrepreneurial skills in different types of organizations.  I encourage everyone to listen to people of this caliber because their stories and experiences can provide us with unique insight.

Marcelo Claure and other leaders’ stories can teach us so many lessons and insights about our own entrepreneurial journeys.  To hear Marcelo Claure’s entire interview with Endeavor, follow this link.  And to hear even more great speakers, check out the Endeavor Presents: Leading Through Crisis playlist on Endeavor Global’s YouTube page.  This is a difficult time as many of us live and lead through crisis, but I hope you also take advantage of the virtual offerings to hear from leaders like Marcelo Claure who have been here before and can offer great guidance and wisdom.